A few years ago I started doodling scenes from my family life. I wanted to capture moments that I might forget, things that made me laugh or stop and think.

I meant the sketches to be very quick and silly, but I was getting caught up in whether they looked enough like my children.

I tried drawing them as little dogs instead, and to my surprise the drawings began to flow much more easily.

When I tried out drawing them daily for #inktober on Twitter a few years ago, the characters began to develop a different shape.

Then on holiday in France we got caught in a thunderstorm while we were visiting an amphitheatre. We made a dash for the car under a tarpaulin that didn’t quite cover us all, and as we ran though the streets of Orange laughing and getting soaked, I knew that it was a scene I wanted to draw. I sketched it that day, then did an ink drawing back home in England. I wanted to capture the exhilaration and the holiday feeling, and it was the first time that the dogs seemed like a family. 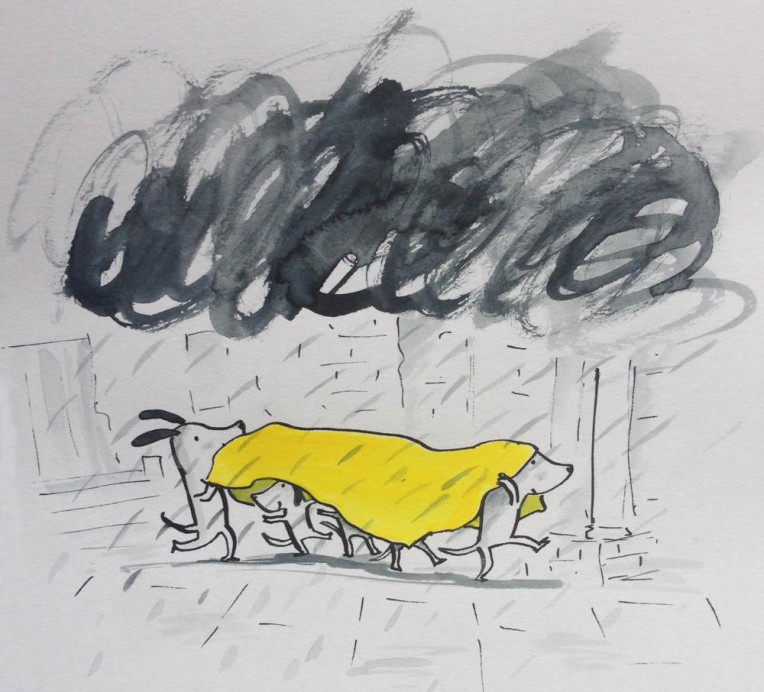 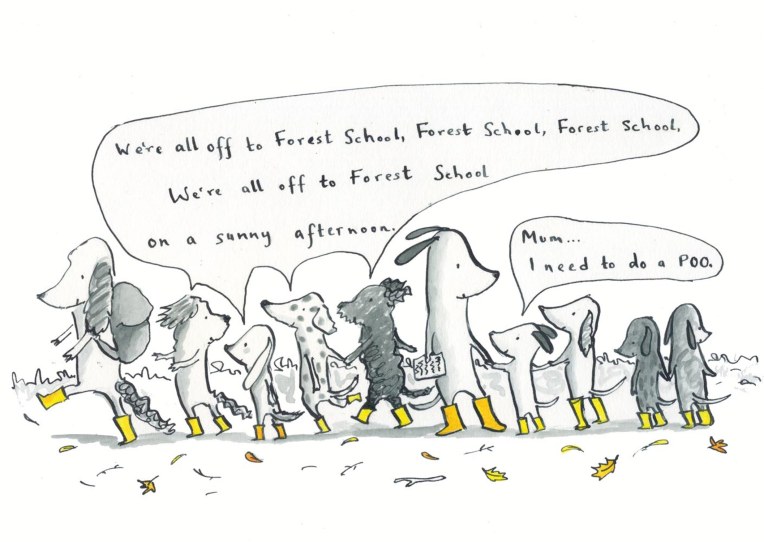 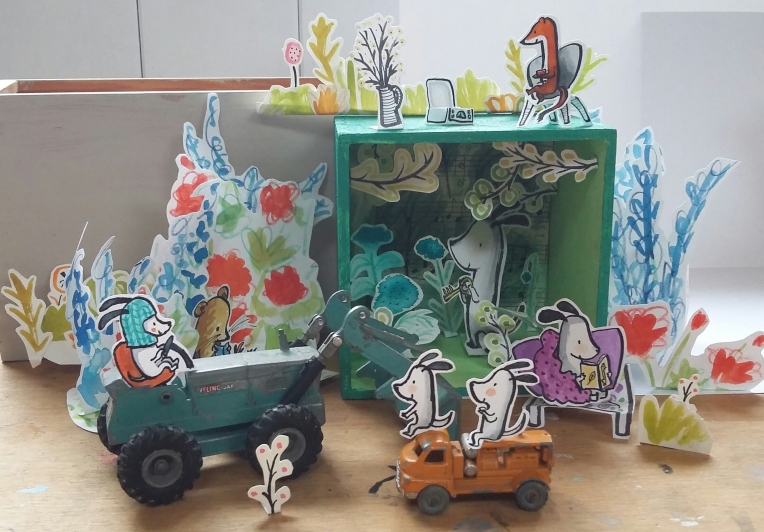 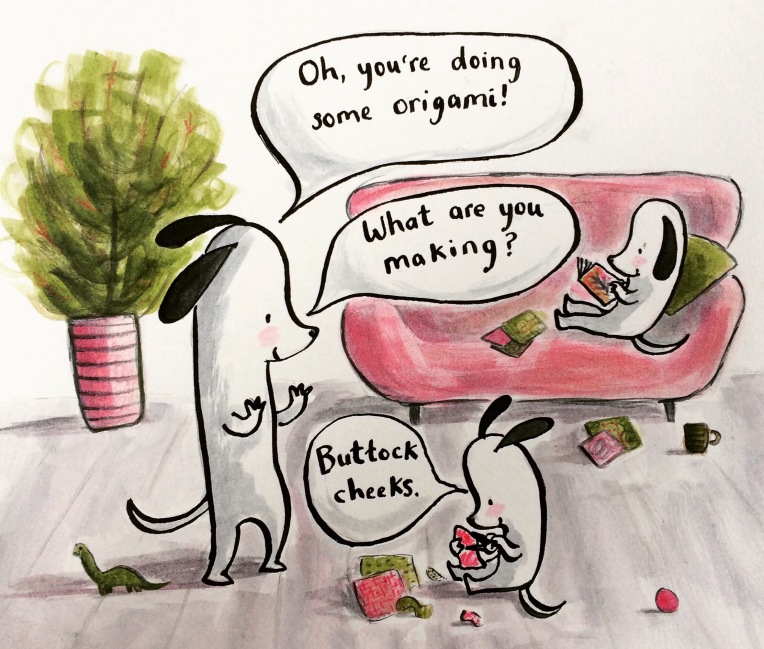 Last year I was very ill and was lucky enough to be able to take the time to really rest and recover. Throughout my treatment and as I grew stronger I drew, wrote and collaged a lot, and found I didn’t want to draw dogs at all. Because I was drawing in a journal just for myself, and not thinking about posting anything, it didn’t matter if my characters looked ‘right’ or not. For the first time in years I could draw without thinking about an audience. Despite the circumstances, it was liberating. I began to realise that I wanted to do more than little inky dog doodles.

I didn’t know if I would go back to drawing dogs, but alongside experimenting with printmaking, painting on canvas, writing and paper cutting I started working with an iPad and Ipencil for the first time, and the dogs have found a new lease of life there. So I think the dogs characters may still be around for a while…

… but in amongst lots of other things.

I was very happy to be asked to put some work in this exhibition space at the lovely Prema Arts Centre in Uley, Gloucestershire. It almost felt like it could become one big diorama…

Last weekend my kids went to a wonderful Forest School, and I helped out for a few hours.

This illustrates the best bit of the day for me… 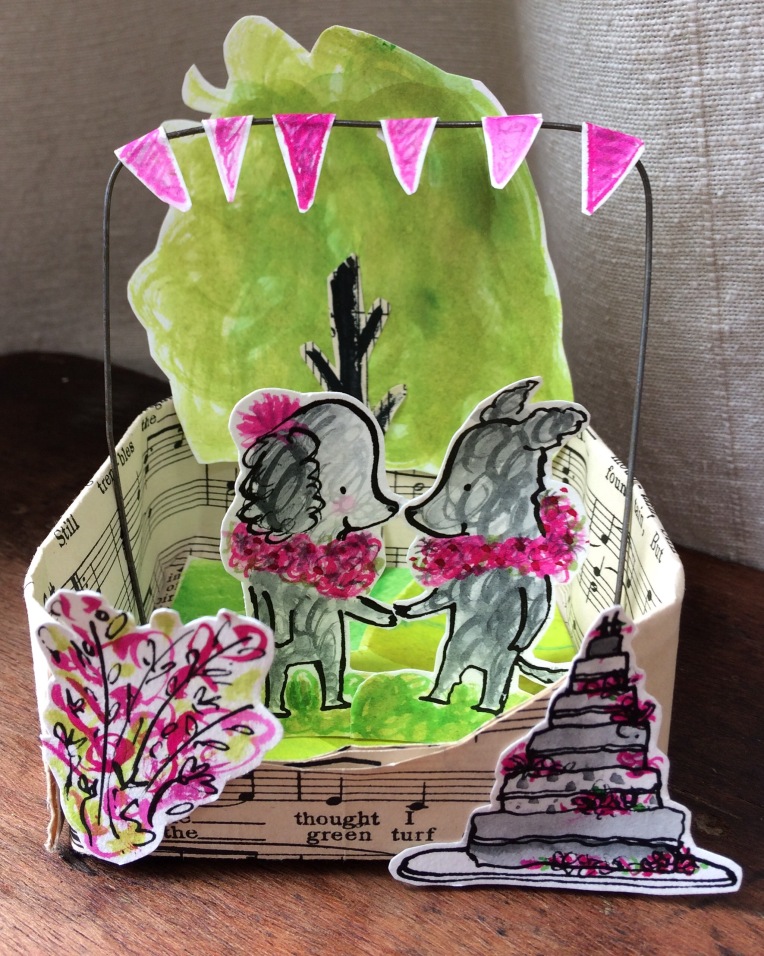 I was nearly late to pick my kids up from school today because once I started making this little scene I just didn’t want to stop.

It’s my brother and his wife, who got married in some woods in Somerset on Saturday…it was a wonderful day filled with blessings and bunting, petals and pasties, wine and water pistols…and the tallest wedding cake I’ve ever seen! 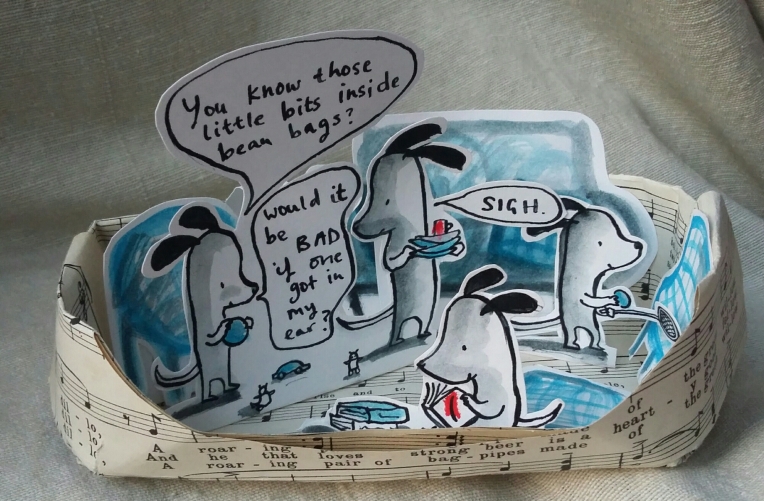 Quite often the first day of the school holidays does not go exactly as I imagined.
Thank goodness for the patient nurses and doctor we saw today and Long Live the NHS!

I drew this little dog with a suitcase shortly after the Referendum here in Britain, still reeling from the idea that we will be leaving the EU.
In the last few weeks I’ve been hearing so many shocking stories of racist abuse being hurled at people on the street and in public places.
I thought of my Italian grandmother arriving in England as a teenager before the Second World War, and wondered what prejudices she faced.
Here in Stroud I know people from Hungary, Italy, USA, Poland, Austria, Portugal, Turkey, Wales, Scotland, the Philippines, Japan, Denmark, Sweden, Australia and Germany.
I wouldn’t have it any other way.

This little paper box was for today’s Lilac Grey #colour_collective on twitter.

It pushed me out of my colour comfort zone – I don’t often use purply colours, but I loved using this grey today.

I’m in the midst of Open Studios this weekend, and it’s been lovely to meet so many people.
It also motivated me to make more dioramas…

…and a few papery things like this Secret Garden…

…and these Hanging Gardens. 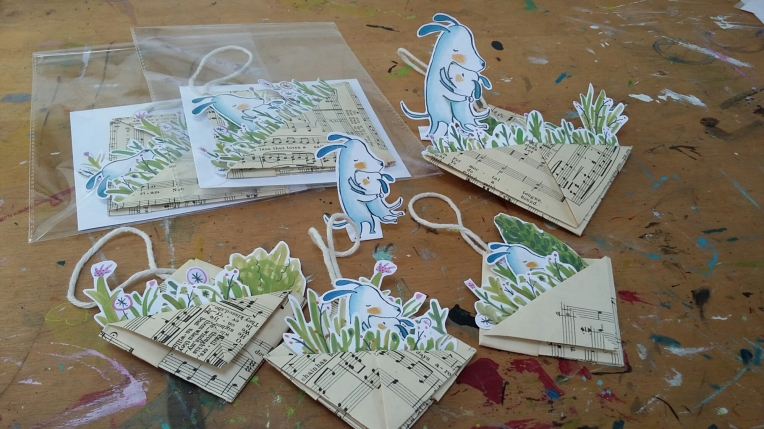 …I feel really tempted to have a snooze on my sofa whenever there’s a quiet moment. So far I’ve resisted (unlike a fellow artist who napped in her garden undetected last week, an approach which is much to be admired. No wonder her artwork is so fabulous).