This Summer I’ve been playing around with red and blue together.

When I got home I started working on a red and blue character.

…and this is how she ended up!

I started doing these at Art Club with The Good Ship Illustration, which is live on Instagram at 8 pm GMT (and it’s free!)

I find that knowing I don’t have long to draw means I can make looser marks, and not worry too much about being accurate.

…then I realised that I could add just enough detail to make them things rather than shapes.

There’s something about drawing the same things over again, but differently each time, that’s exciting and relaxing at the same time.

I like working so quickly that I really don’t know how each drawing will turn out!

Throughout this long period of Lockdown we’ve been lucky to be able to work from home and homeschool.

When we were only allowed out to exercise, I really missed being able to stop and draw. I used to love drawing people in streets, supermarkets and cafes.

Homeschooling meant that instead of having whole mornings in my studio, I was only picking up my sketchbook for the odd half hour, which felt frustrating. Eventually I worked out more of a balance, but it took time.

I began to draw everyday objects, my garden, my family and the views from my windows, and realised that there was so much I could learn from what was around me.

I also did a lovely online illustration course by The Good Ship Illustration (more about that later!) which helped me to experiment with how and what I draw.

When we could spend a bit more time outside, I found I was drawing in a different way – really looking at my surroundings. By limiting myself to only 2 or 3 materials when I’m out and about, I don’t feel overwhelmed by trying to get everything in.

Has anyone else used sketchbooks more, or in a different way, during Lockdown? Or even started drawing for the first time?

In these strange days, I’ve been heartened by the examples of kindness and community spirit I’ve seen.

Whether it’s been neighbours discussing home schooling, postcards offering help through my parents’ letterbox, or images of Italians on balconies singing, each time I witness this kindness in action it helps me to focus on hope rather than fear.

I’ve seen how inventive people are – Rhymetime sessions for babies and children that my friend Esther Steward held in Bristol can now be live-streamed so that families can still enjoy them – anywhere.

I’ve listened to Oliver Jeffers reading aloud from his picture books (he’s doing this each weekday until it’s safe to go out again). My children claim to be too old for this now but I’m not!

Singer/songwriter Emma Wallace is singing a cheery song or soothing lullaby everyday on Instagram (and taking requests!) – she has the most beautiful voice.

I’ve been trying to think what I can offer, apart from in my local community, and I thought some cheering images to download for free might be welcome.

So if you can’t hug someone for the time being and would like to send them a Fox Hug card, you can download one here! It’s an A4 sheet with an A5 image on so that you can fold it in half.

You can also download it as an A4 image to frame here:

Or if you’d like to send someone a digital hug instead of printing it :

Please let me know if these work ok, I’ve never put downloadable images on my website before!

I hope everyone is well and taking care xx

A few years ago I started doodling scenes from my family life. I wanted to capture moments that I might forget, things that made me laugh or stop and think.

I meant the sketches to be very quick and silly, but I was getting caught up in whether they looked enough like my children.

I tried drawing them as little dogs instead, and to my surprise the drawings began to flow much more easily.

When I tried out drawing them daily for #inktober on Twitter a few years ago, the characters began to develop a different shape.

Then on holiday in France we got caught in a thunderstorm while we were visiting an amphitheatre. We made a dash for the car under a tarpaulin that didn’t quite cover us all, and as we ran though the streets of Orange laughing and getting soaked, I knew that it was a scene I wanted to draw. I sketched it that day, then did an ink drawing back home in England. I wanted to capture the exhilaration and the holiday feeling, and it was the first time that the dogs seemed like a family.

Last year I was very ill and was lucky enough to be able to take the time to really rest and recover. Throughout my treatment and as I grew stronger I drew, wrote and collaged a lot, and found I didn’t want to draw dogs at all. Because I was drawing in a journal just for myself, and not thinking about posting anything, it didn’t matter if my characters looked ‘right’ or not. For the first time in years I could draw without thinking about an audience. Despite the circumstances, it was liberating. I began to realise that I wanted to do more than little inky dog doodles. 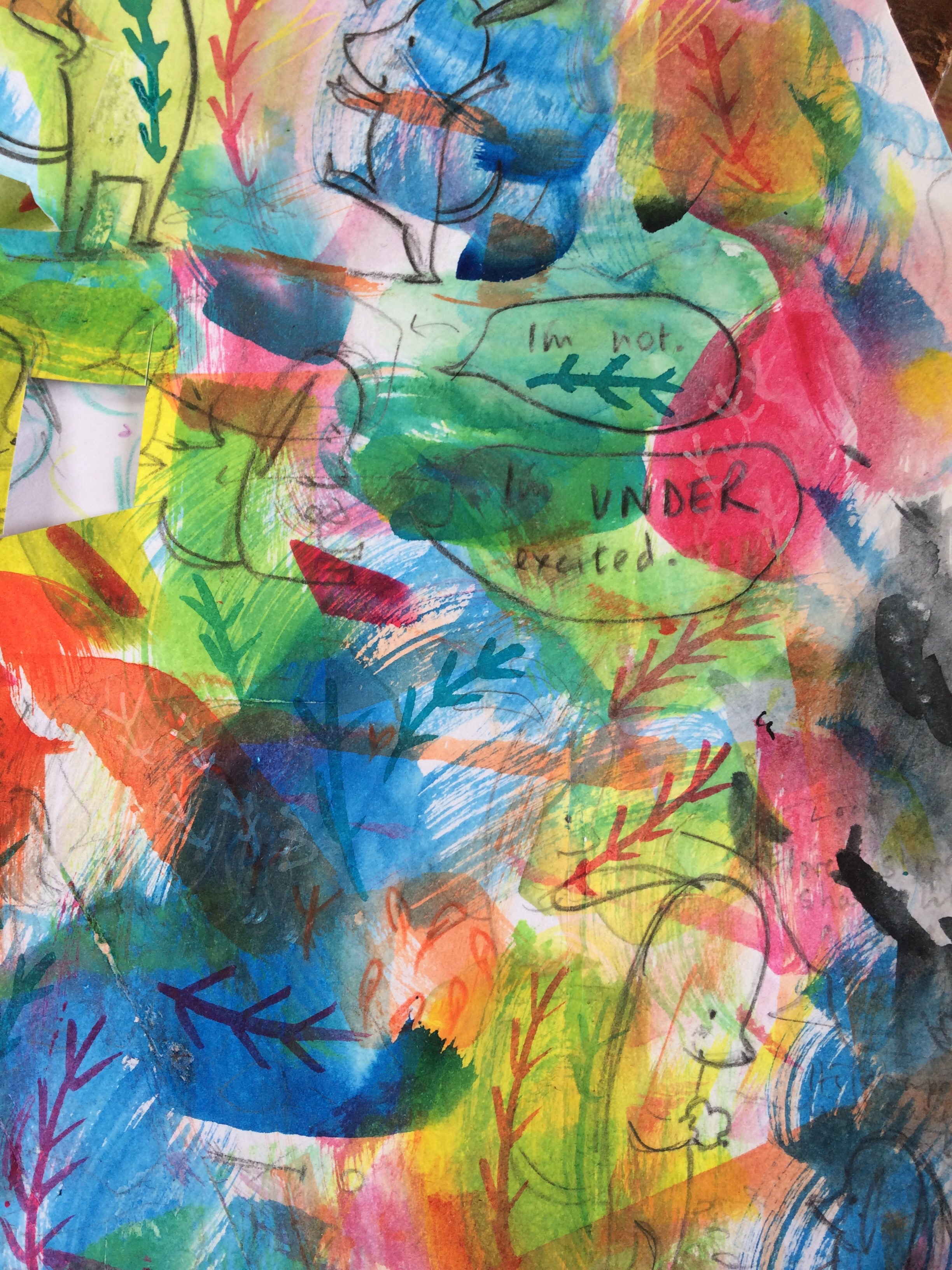 I didn’t know if I would go back to drawing dogs, but alongside experimenting with printmaking, painting on canvas, writing and paper cutting I started working with an iPad and Ipencil for the first time, and the dogs have found a new lease of life there. So I think the dogs characters may still be around for a while…

… but in amongst lots of other things. 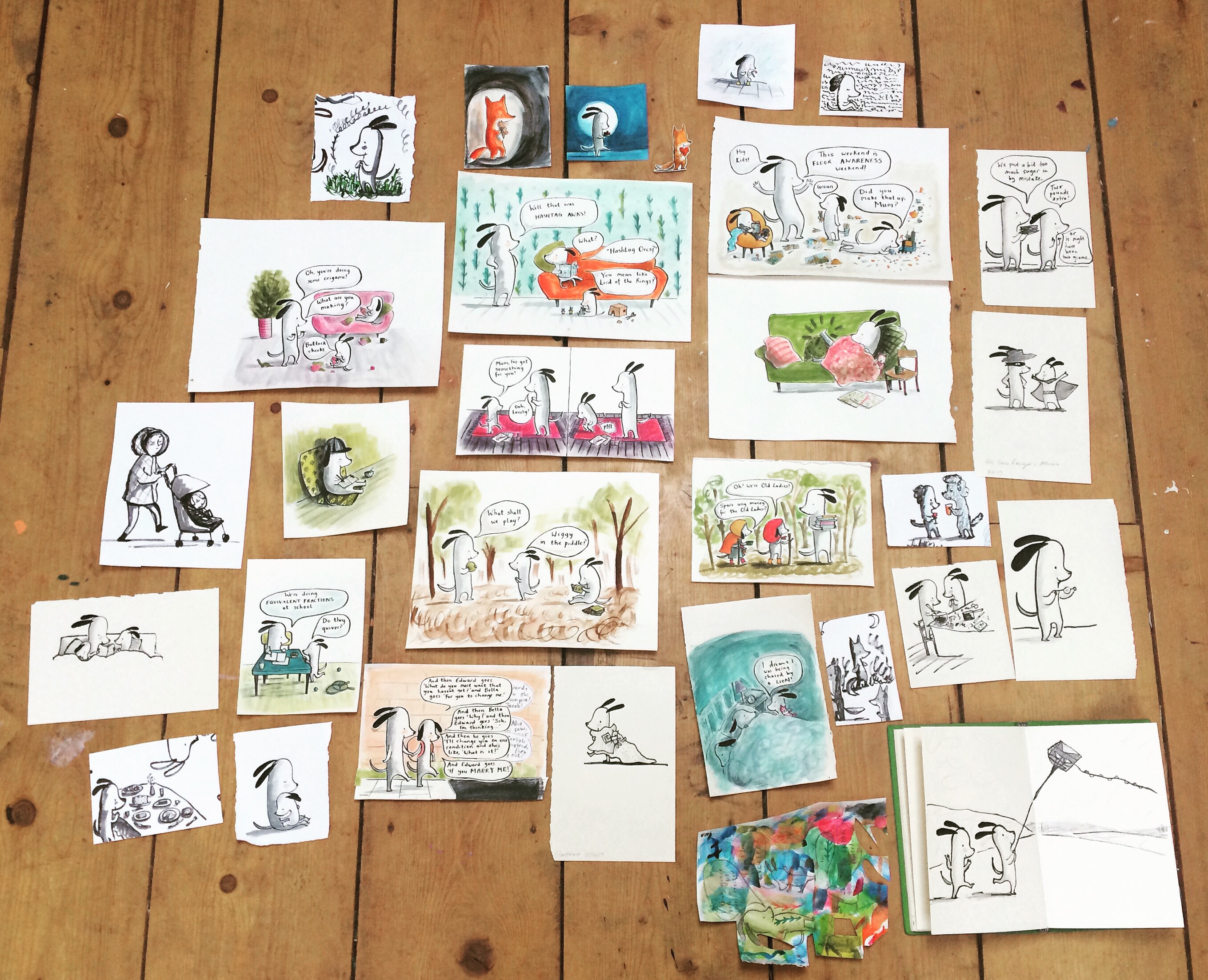 This is the first time that I’ve completed #inktober (an inky drawing each day of October) and it’s been really good fun – but also more challenging that I expected. I started out with the aim of doing some more detailed drawings (usually I draw quite quickly in ink) and I did manage a few. But at the weekends – when I’m busy with my family and don’t go to my studio – I found I was forgetting until the evening, then doing a really quick sketch. And in half term I only really did quick sketches too – but I realised that was ok. It’s about drawing regularly, not having a pile of finished artwork.

I wanted to try using colours that I wouldn’t normally choose so I selected colours at random from a paint chart. This worked well in the studio but in my sketchbook I allowed myself to just use a black or grey pentel brush pen and a pencil.

It did remind me that capturing the things that make me smile or the moments that I want to remember is really important to me, and that actually drawing every day if possible is more important than posting photos of the drawings!